When you buy a Doberman from breeders who care about such things, ear posting is something you have to deal with for at least the first month that you have your puppy. And there are differents types of ear crops done by various people with more or less expertise. The person who did Zodi's litter is a vet who travels to various other vet practices to perform this surgery. Most vets don't do enough ear crops to even consider themselves competent much less proficient so the ones who do it all the time and have a talent for it are in high demand.

I'm told that Zodi has a "medium" ear crop which means it's not as long as some ear crops that are done on show dogs. It's also not a short ear crop like you'd see on a "backyard" bred dog. Lots of rescue Dobes have short ear crops although with most of them the ears don't stand, or only one of them does, because they weren't posted correctly or at all. And some of them have ears that are just butchered and you can tell they were done by someone who had no idea what they were doing and so very likely did it without anesthesia. The lucky ones have natural ears.

So, on Sunday I took Zodi back over to the breeder's to put her ears up in posts so they'd harden as upright and straight as possible. I've posted ears before but I hate doing it and I knew the breeder would be much faster and better at it than I would and I wanted to spare Zodi the fumbling I knew would be inevitable if I did it. And I also wanted the breeder to look at her ears and make sure they were healing well.

This breeder uses drinking straws as the post and wraps it in paper towel to soften it and make it somewhat bulkier, too. When I was doing Haven's and Simon's ears I used Tampax tampons, something a lot of breeders used at the time. I think tampons were popular because they already had nice soft absorbant bottoms and also had the cardboard "posts" of the applicators. But apparently nowadays the thought is to leave the bell of the ear as empty as possible and the hollow straw also allows more air to flow into and out of the ear itself.

So here are a few pictures of the process as it happened: 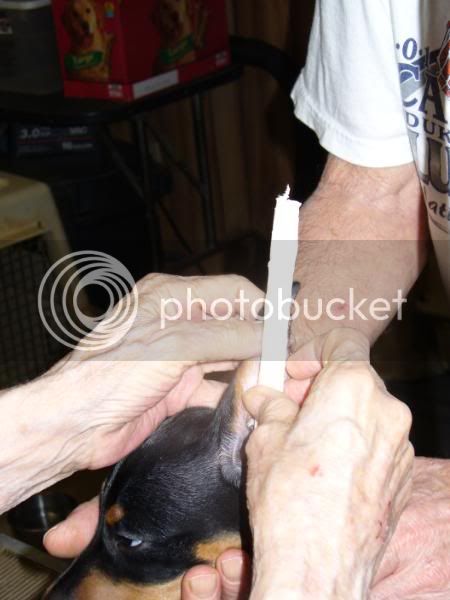 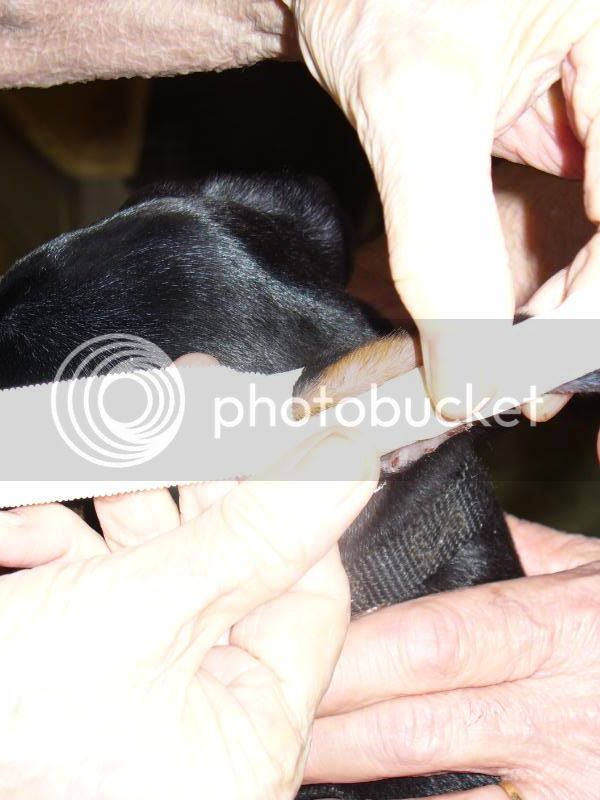 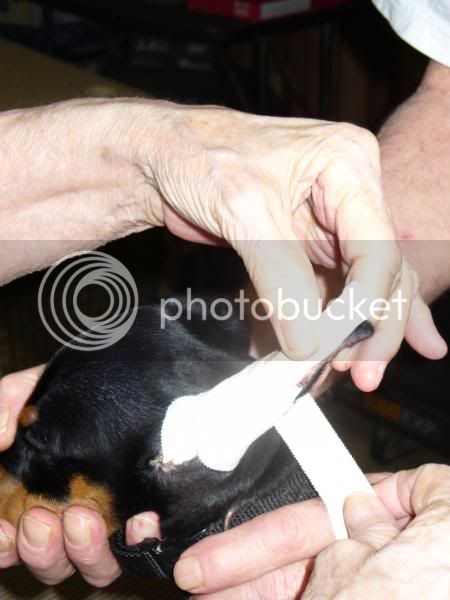 Zodi was quite relaxed while all this occured. And it hardly took five minutes from start to finish because the breeder had everything all ready to hand, all the tape cut and hanging on the grooming table arm and the posts already measured and wrapped.

Once she was done and allowed back on the floor she went straight back to chewing on the incredibly large chewie the breeder had provided.

After that we decided to get a few more stacked photos and a few pictures with her sire, Sherman. Sherman was so cute about it, he seemed very worried about Zodi or maybe it was the camera flash. In any case it was impossible to get any good ones this time. Next time we'll take them outside for the photos and maybe I can get a picture that does him justice. 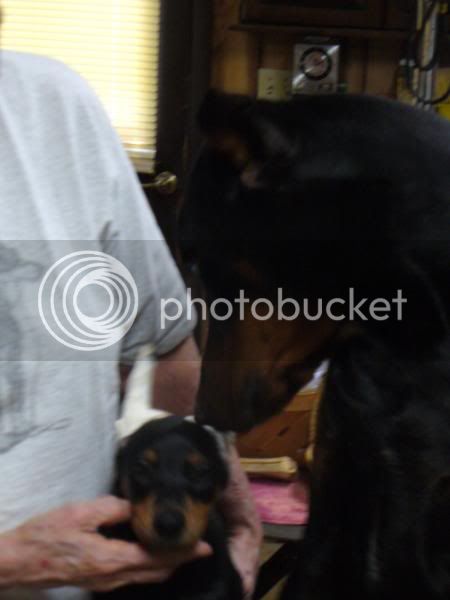 After all that Zodi and I were exhausted and went home to nap it off. I'm happy to report that the posts don't seem to bother her and she seems to barely notice they're there. She did poke Devon with one when they were playing which surprised him into a yelp but otherwise they're no problem. I'm supposed to leave them up until Thursday night and then take them down and let them dry for 24 hours before putting them back up again.
Collapse